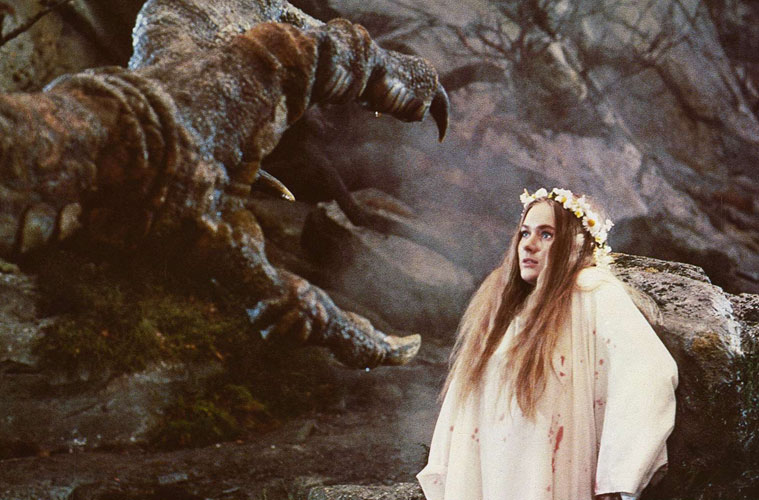 Dragonslayer is fantasy film set in 6th century Ireland and begins with a group of villagers approaching the castle of Craggenmoor in search of the wizard Ulrich in the hope that he can slay the dragon.

The film has a captivating cast – especially in the form of the late, great Ralph Richardson. Although Peter Nicol may not be the first choice for a hero – in the context of the film his boyish naivety and charm work well.

There is also a good turn put in by a young Ian McDermid, playing a Holy Man who is trying to convert the pagan village into a god-fearing Christian society. Without spoiling the film, its fair to say that Christianity and Dragons don’t mix.

The real star though is the Dragon Vermithrax – created by ILM – it is every inch the quintessential Dragon. The film carefully keeps the Dragon’s appearance to fleeting glimpses and tantalising shots, which accentuate the terror that this creature brings. Later in the film the Dragon maintains the fear and ferocity established earlier. This is one Dragon who could give CGI Smaug a good slap.

The atmosphere of the film is dark, brooding and suspenseful and although a PG, is not really for children. The location shots are beautiful.

Dragonslayer is a fantasy film in its truest sense, but is devoid of the silly humour and CGI that certain fantasy films include. It is also a film where the viewer senses much greater events happening behind the scenes – the advent of Christianity in a Pagan Britain, the loss of magic and dragons from the world and a general sense that these are indeed the last days of sorcery. Dragonslayer (1981)
5.0Overall Score
Monsters – Vermithrax is fantastic – and at the age of 38 actually still frightened me.
Cast – An elderly wizard, a young hero, a beautiful princess, an odious king and Ian McDermid
Story – A fantastic fantasy adventure without a hobbit in a barrel in sight.
Reader Rating 1 Vote