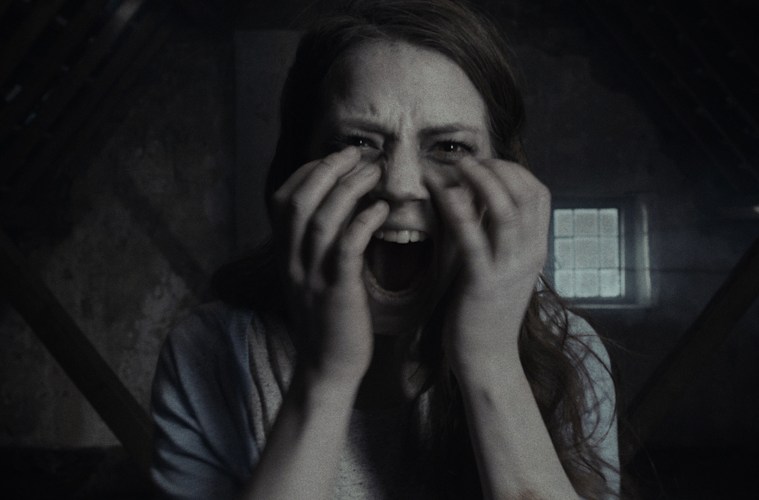 ‘Dare’ was created as a benchmark film for the Bloody Cuts Horror Challenge (2013), and finally reclassified as a Bloody Cuts episode as the team approach hitting their goal of making 13 short slices of terror (2017).

Directed and Produced by: Anthony Melton and Ben Franklin

“On the outskirts of Lynnsmouth three teenage girls break into the grounds of an old crumbling property overlooking Dodman’s lake and dare each other to enter the rotten house, it’s rumored to be haunted by the ghost of Lord Tarquin Wyrmwood IV and his mistress whom hung themselves together in the attic a hundred years past.

The two older girls bully Amy into going first… she must climb to the attic and count to a hundred, a second for each year that’s passed since the deaths of the owners, the legend promises that if you make it to a hundred you’ll see a ghost.

Amy enters the house… she didn’t believe in ghosts…

‘Dare’ was created specifically for the first ever ‘Who’s There’ Bloody Cuts Film Challenge. This was served up as an example of a sub three minute short, created to the theme of ‘Who’s There?’ and made for under a $1000 budget. A benchmark, a jumping-off point, a bar set for other filmmakers to jump over. Which they did. Spectacularly.

Filmed over two days in a dilapidated, terrifying old farmhouse, some of the building was sealed off because the ceiling had fallen down. Nature had reclaimed half of it, and the other half was a bird graveyard. It was the least glamorous shoot Bloody Cuts ever had to endure…

Thankfully Bloody Cuts have a lot of skilled friends and family members willing to spend their weekend in a broken-down, soot-filled ruin for free. Featuring some of the more complicated practical effects Bloody Cuts have ever had to deal with, ‘Dare’ required the use of floor-drilling, wire-work, rota-spinning and hiding in cupboards! We even used one of the many bird-skeletons for set decoration.

Due to the isolated location and lack of anywhere remotely clean, Millennium FX’s make-up work had to be applied on the side of a dirt-road, which certainly surprised the locals! Thankfully it didn’t rain, otherwise this would’ve been a very different story. ‘Dare’ delivers a tight, fast, furious and horrifying twist on the haunted house genre. Not bad considering it was created as an ‘example’ of what could be achieved with a limited budget and specific theme.

Trivia: The painting which changes from being ‘normal’ into a twisted nightmare is not actually Lord Tarquin Wyrmwood IV, but Bloody Cuts writer Joel Morgan. And yes, that is his hat. And no, you can’t have it.